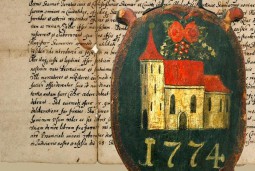 A collection of Transylvanian guild signs will be exhibited in Bucharest starting February 19, at 13:00, in the Lapidarium hall of the National Museum of History.

Craft guilds played a very important role in the economic development of cities of Transylvania. The oldest guilds in the region date from the time of Louis of Anjou (1376). They regulated the most important issues related to the economic and legal aspects of community life by naming guild masters and regulating their relations with the guild members and the city government.

Each guild had a seal and an insignia of its own. These marks of heraldic value were exhibited at the headquarters of the guilds or appeared on their flags and treasure chests.

The National Museum of History keeps a collection of such marks brought from various cities of Transylvania, dating from the XV – XVIII centuries, like the ones of the guild of builders (Sighişoara, 1774), millers (Sighişoara, 1784), carpenters (Bistriţa, 1680), tailors (Sibiu, 1695), shoemakers (Cluj, 1625) or woodworkers (Sibiu, 1450). Together with these seals and insignia will be exposed a goblet with the insignia of the tailors’ guild from Târgu Mureş (1629) and a chest belonging to a guild in Oradea (1798).

The micro-exhibition at the National Museum of History will be open for the public from February 19 to March 15, 2015 and can be visited from Wednesday to Sunday, during 09:00 – 17:00.