Two of the greatest Romanian classical musicians to play Beethoven together 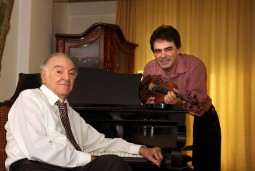 Two of the greatest Romanian classical musicians, pianist Valentin Gheorghiu and violinist Gabriel Croitoru, will meet in a special concert at Sala Radio.

The concert taking place on February 4, at 19:00, is the second part of the integral of Beethoven’s sonatas for violin and piano. The first part was performed by the two artists at the end of the Sala Radio’s last year season. The next week’s concert will include three of the ten sonatas.

Gheorghiu and Croitoru will be performing on two valuable instruments: Sala Radio’s new Steinway piano and the Guarneri violin which belonged to famous Romanian composer George Enescu, instrument now found under the administration of the “George Enescu” National Museum and, since 2008, in the use of Gabriel Croitoru.

Valentin Gheorghiu is a renowned Romanian pianist and composer, having performed in the company of big classical music names in Austria, France, Germany, USA, Switzerland, Italy, Great Britain, Sweden, Norway, Canada, Spain or Japan. Throughout time, he has been awarded with the Romanian Academy Award and the title of Doctor Honoris Causa by both the National Music University in Bucharest and the Arts University in Iaşi. He is currently jury member of seven classical music competitions.

Gabriel Croitoru, soloist of the Radio Orchestras and Choirs, has held over one thousand performances throughout time. He has played as a soloist in the company of famous orchestras, such as the Royal Philharmonic, Queen Sofia Chamber Orchestra, the symphonic orchestras in Monte-Carlo, Thessaloniki, Malaga, Seville, Cannes and Lyon. He has held recitals in France, Spain, Germany, Belgium, the Netherlands, Italy, China and USA. Starting 2011, he held several national tours to promote classical music. On January 22, 2015, Croitoru performed in a special recital in London, part of a programme promoting George Enescu’s works abroad.

The two musicians performing together have a special connection, Gabriel Croitoru being one of the best disciples of renowned Ştefan Gheorghiu, the pianist’s brother.

Tickets of RON 10, 15 and 20 are available online on bilete.ro and in Inmedio shops marked with the bilete.ro logo, in Germanos store, at the Sala Radio ticket office and in Romanian Post offices.