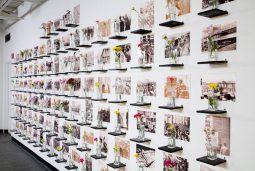 The third edition of the Bucharest Art Week takes place until November 12th in several exhibition spaces across Bucharest.

The guest-curator of this year’s edition is art historian and critic Oana Tănase. The theme of the event is The Lesson of Nature. “The intentions of this curatorial proposal, which will define the third edition of Bucharest Art Week 2016, resuming a kaleidoscope format – solo and collective exhibitions, discussions and lectures, workshops and artists’ residences – are to explore, in a dialogue with the artists, theorists and the audience, the way in which a series of extremely diverse artistic practices, together with observations and philosophical inquiries, start from and/or stop at nature, how they strip it, question it, imagine it in keeping with new scenarios,” Tănase explains.

Bucharest Art Week is organized by the Association for the Promotion of Contemporary Arts (APAC), created in 2010, with the aim to promote and support artists from the sphere of contemporary visual and performing arts, as well as to facilitate the understanding of contemporary art and of the theoretical discourses accompanying it by a wide and diversified audience.

The program of the Bucharest Art Week is being updated here.