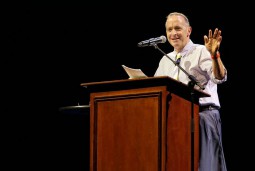 David Sedaris, the humor writer and author of New York Times bestsellers translated into 29 languages, returns to Bucharest for a new event. Sedaris will read excerpts from his personal essays in an event set to take place June 20th, at Arcub Gabroveni, starting 19:30.

The performance will be followed by a Q&A session and a book signing session. His latest book to be translated in Romanian is Me Talk Pretty One Day, published by Publica publishing house.

Sedaris was publicly recognized in 1992 when National Public Radio broadcast his essay SantaLand Diaries. He published his first collection of essays and short stories, Barrel Fever, in 1994. His next five essay collections, Naked (1997), Holidays on Ice (1997), Me Talk Pretty One Day (2000), Dress Your Family in Corduroy and Denim (2004), and When You Are Engulfed in Flames (2008), became New York Times Best Sellers. In 2010, he released a collection of stories, Squirrel Seeks Chipmunk: A Modest Bestiary. In 2013, Sedaris released his latest collection of essays, Let’s Explore Diabetes with Owls.

Tickets for the event cost RON 35 and can be purchased at eventbook.ro.