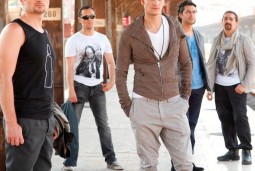 Romanian band “VAMA” will perform in a special concert dedicated to Woman’s Day on March 10 at Cinema Patria in Bucharest.

VAMA is one of the most popular Romanian rock bands founded by Tudor Chirila and Eugen Caminschi in 2006, after they played 10 years in their former band “Vama Veche”. The new band is formed by Tudor Chirila, Eugen Caminschi, Gelu Ionescu, Lucian Cioarga and Dan Opris. Their first album was launched in 2008 and had huge success with singles like “It’s full of girls” and “Bed For Love”.

Their second album, called “2012”, was launched last year with the single “Love Epidemic” (Epidemie de iubire), that had a huge breakdown.

Tickets for the concert can be found on iabilet.ro and bestmusic.ro/bilete networks and cost RON 60 and RON 100 (VIP). Doors open at 20:00.