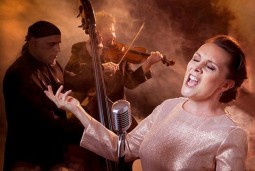 The most popular and successful Belgian band of all times, Vaya Con Dios, will perform in two live concerts on March 15 and March 16 at Sala Palatului in Bucharest. This is the band’s Farewell Tour.

Famous hits like “What’s a Woman”, “Puerto Rico”, or “Neh Na Na Na” are constantly heard on all radio stations. The band toured across the globe from Russia to Angola. In 2008, Belgium issued a series of “Vaya con Dios” postage stamps that had the face of the lead singer Dani Klein. The band has exceeding sales of over 7 millions released albums and 3 million singles.

Tickets are available only for the concert on March 16  at prices between RON 120 and RON 300, depending on the distance from the stage. Tickets can be purchased online at eventim.ro network. Both concerts will start at 20:00.