Vivaldi & Piazzolla concert kicks off the new year at Odeon 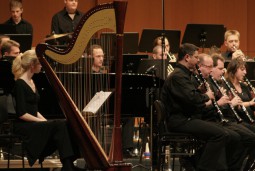 Two of the most popular artists from the young generation of classical music performers, violinist Alexandru Tomescu and conductor Tiberiu Soare, together with Symphactory Orchestra kick off the new year with a concert at the Odeon Theatre in Bucharest. Seasons by Vivaldi and Piazzolla, The concert taking place on January 8 brings together two different styles: Baroque, with Vivaldi’s Seasons, and Tango, with Astor Piazzolla’s passionate rhythms.
Tiberiu Soare is one of the most acclaimed Romanian musicians, both in the country and abroad, main conductor of the Radio Orchestras and Choirs, invited to conduct well-known orchestras in England, France, Germany, Austria, Czech Republic or Russia. Alexandru Tomescu was acclaimed on stages such as Théâtre des Champs Elysées – Paris, Carnegie Hall – New York or Metropolitan Arts Centre – Tokio. He is also known for performing on a Stradivarius violin. Symphactory Orchestra is an ensemble of young musicians, carefully guided by conductors Tiberiu Soare and Gabriel Bebeşelea. The orchestra was invited to hold concerts at the George Enescu Festival, Bucharest Music Film Festival and B-Fit in the Street festivals.
During the break between the two parts of the concert at Odeon Theatre, participants can enjoy a glass of wine in the theater foyer.
Tickets are available only at the Odeon Theatre. Prices range from RON 159 (first category – central boxes and rows 1 and 2), RON 106 (second category – theatre room and lateral boxes) and RON 74,2 (third category).