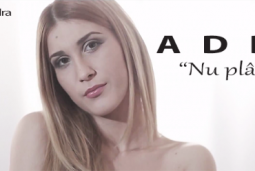 We’ve been listening to this song for a while – it’s been all over the Romanian radios and music TV stations. Our test for choosing to feature a Romanian song is usually to listen it for several times, to see if the effect wears off. We still like this one, so here it is.

It’s called Nu plange Ana – Don’t cry Ana. We’re not the only ones who like this song – it already has 9.3 million views on YouTube.