Other categories
Romanian teenager goes back to tradition: weaves and knits traditional items and sells them abroad 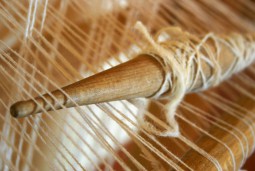 A 16-year old Romanian has learned the traditional craft of weaving carpets and knitting, and even turned his passion into a small business. Andrei Vladimir, a teenage boy from the town of Barlad in Northern Romania, learned how to weave and knit from his grandmother, and started crafting traditional items when he was 12. At first, he made carpets for himself, but as they started to pile up, he also started to sell them, according to Digi24 and Adevarul.

He makes traditional blouses – called Ie- carpets, blankets, wool socks and hats, and sells them either at fairs, or on the internet. The teenager also sells abroad, all over Europe.