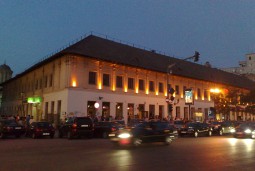 This weekend, Starbucks opened a new café in Bucharest’s Old Town, in the iconic building of Hanul lui Manuc. This is the coffee chain’s only street unit, all of the other seven in Bucharest being located within malls or office buildings.

Opened at the ground floor of Hanul lui Manuc, the café is located at the entrance in the Old Town, with street view over Unirii Square. Starbucks announced extended opening hours, the new location closing at midnight.

For next year, the company also announced the relocation of the cafés in America House and Promenada Mall, the first of them being planned for a reopening on Victoriei Avenue, in a much larger space.