Other categories
The multicultural legacy of Babadag 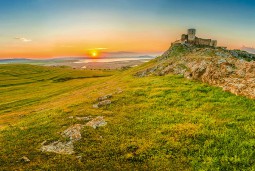 For the traveler looking to explore more of Romania’s Dobrogea region, the town of Babadag offers the opportunity to get acquainted to the history of the area. The town used to host the ancient Roman settlement called Vicus Novus. Roman era landmarks were found in the center of the city, proving the almost urban development level of the settlement as water pipes made of burnt ceramics were found here. Today, at almost 9,000 inhabitants, Babadag is a diverse city, with a significant Muslim and Turkish population.

Between 1677 and 1678 the town served as the residence of the Turkish pasha. In order to be able to better follow and coordinate the military troops in the confrontations with the Russian Empire, the residence of the Otoman pasha was moved from Silistra to Babadag, where the pasha Gazi Ali ordered a mosque to be built, in the 1610s. As such,  some of the most important tourist landmarks in the city speak of the almost 500 years long Ottoman dominance: the Gazi-Ali-Pasa mosque, the Kalaigi fountain sitting in front of it, the mausoleum of Sari Saltuk Dede and the Eastern Art Museum,  hosted in a 19th century, oriental-style building.

And at about eight kilometers away from the city, on the way to Tulcea, the tourist can find the ruins of the Enisala fortress. Raising on a hill next to the Enisala village, the fortress, locally named Heracleea, was built at the end of 13th century by the Byzantine and Genovese commercial powers. At the beginning of the 14th century it was included in the defensive system of the Romanian principality and was afterwards transformed into a garrison of the Ottoman Empire. The only medieval fortress in Dobrogea, the Enisala site stands proof of a time when the region was part of the Genovese colonies which also included the Chilia and Likostomion towns in the Danube Delta.

How to get there?

To get to Enisala you can take the European route 81 and then follow the national road 2A passing through Slobozia to get to the destination.

Several lodging options are available to tourists looking to visit the place: Babadag Cabin or the La Parmac hotel.