Other categories
The sea of the Bucegi Mountains 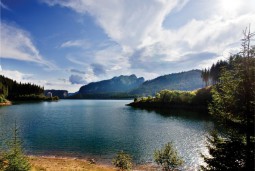 Deemed by many one of the most spectacular sites in the area, the Bulboci lake is also known as the Sea of the Bucegi Mountains, in reference to the size of the lake’s surface. It can be found at the border between the Dambovita and Prahova counties, in the Bucegi Natural Park, between the Tatarului Gorges and Zanoagei Gorges.

Bulboci is an artificial lake, but one of the few with a natural dam, made of soil and rock. It is located at a 1,438 meters altitude, the highest altitude for a lake in the area. It is surrounded by majestic landscapes of forests of conifers, and, behind them, the 2000 meters tall peaks of the mountains. The dam is approximately 55 meters tall and has an accumulation of 18 million cubic meters of water. It captures the waters of the Ialomita river, and is located upstream of the Zanoagei Gorges, another important tourist attraction and a geological monument.

The lake makes a good starting point for exploring various mountain tracks in the area leading to such attractions as the Scropoasa lake, the Padina plateau, the Ialomicioarei cave, the Babele cabin or the Zanoagei Gorges.

For accommodation options in the area you can try the Bolboci cabin, on the shore of the lake. Built in the 1920s, the cabin can house around 60 people.

How to get there: