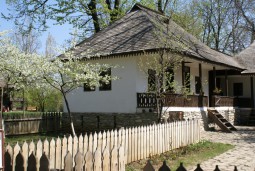 A new wing was inaugurated at the Dimitrie Gusti Village Museum in Bucharest, at the same time with the institution’s 80-year anniversary.

Nhe new section includes 30 houses which have been moved from various villages across Romania to the capital. Visitors will be able to find here an inn, a dance area as well as a playground for children visiting the museum. Besides constructions from various areas of Romania visitors will be able to find here a Minorities Alley, featuring a Jewish house from Maramures or an 1896 Saxon house from Sibiu.

The Village Museum in Bucharest was one of the first open-air ethnographic museums in the country and in Europe. It was established in 1936 following sustained theoretical and field research undertaken by professor Dimitrie Gusti, the founder of the Bucharest Sociology School.When the Bucharest museum opened in the 1930s, only two other such museums existed in Europe: the Skansen Museum in Stockholm, opened in 1891 and the Bigdo Museum in Lillehamer, Norway. In Romania, professor Romulus Vuia had opened in 1929 the Ethnographic Museum of Transylvania in Cluj.

The museum was designed to show visitors the reality of village life, as it was or is lived by the Romanian peasant. At the opening it stood on 6.5 hectares of land and featured 33 authentic complexes, transferred from the researched villages: houses with annexes, a church, technical installations and fountains.  One of the oldest constructions that can be admired here dates back to 1775. It is a household from Berbesti, Maramures county. Also among the oldest pieces are an 1800 Hunedoara household and a 1772 wooden church from Dragomiresti, Maramures county.

Besides visiting the patrimony of the museum, the public can sample the permanent exhibition selling items created by anonymous craftsmen: ceramics, textiles, wooden and glass icons, wooden objects, toys and furniture.

The Village Museum is taking part in the Night of the Museums event, when access to the New Village area of the place will be free between 19:00 and 22:00.