At around one hour drive from Bucharest, on the way to Prahova Valley, sits Ploiesti, a city of around 200,000 people and the ninth most populous in Romania. A transport hub and an important industrial and oil industry center, Ploiesti emerged as a trade and manufacturing town in the 17th and 18th centuries. During the 19th century the city was an important oil extraction and refinery site, which also made it the target of the Allies during the World War II. Ploiesti is also known as the place of the self-proclaimed Republic of Ploiesti, a short-lived 1870 revolt against the Romanian monarchy.

Although not a traditional tourist destination, the city is home to several unique museums in the country. The Oil Museum opened in 1961 and hosts several historical oil extraction equipment, oil-based street lamps and various items documenting the history of the oil industry in the area and in the country. The Clock Museum, currently undergoing renovation, hosts almost 1,000 items from all over Europe, among which a 1634 wood pendulum activated by a water fall, the first pocket watch, tower horologes and many other pieces crafted by British, French or Swiss master watchmakers.

Also on the cultural side, the city is home to the Ploiesti Philharmonic Orchestra, one of the top-rated philharmonic orchestras in the country. Architecturally, there is a wealth of 19th century buildings to see but also the 1785 Hagi Prodan Museum. Built by local merchant Hagi Prodan, it exemplifies old Romanian architecture and for a short time it also hosted the first museum in Ploiesti – the county museum. 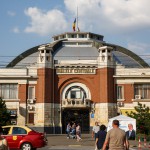 You can see some of the city’s most historical parts by taking a walk on the Chestnuts Boulevard (Bulevardul cu Castani), which links its South train station to the center. On the way, you can check the building of the Clock Museum, the county Art Museum – hosting pieces by landmark Romanian painters such as Nicolae Grigorescu, Theodor Aman, Gheorghe Tattarescu, Ion Andreescu or Stefan Luchian – or the History Museum. A visit through the city wouldn’t be complete without a stop to the main market – Halele Centrale (pictured), hosted in a 1930 building designed by architect Toma Socolescu, whose name is linked to many works in the city whose mayor he also was.