The Botanical Garden in Bucharest

Among Bucharest parks, the Botanical Garden holds a special place for not only being home to more than 10,000 species of plants but also for being one of the quietest spots of the capital.

The Cotroceni site is not the capital’s first Botanical garden. The first such venue was established by Romanian physician Carol Davila in 1860 near the Medical School. Its first two directors were botanists Ulrich Hoffmann and Dimitrie Grecescu.  Its third director, Dimitrie Branza, whose name the garden carries, moved it to where it can be found today, spreading on 17.5 hectares, including 4,000 sqm of greenhouses. Belgian landscape architect Louis Fuchs also worked on the project and in 1891 the garden was inaugurated.

In time, the site suffered various damages, most notably at the 1892 flooding and during the First and Second World Wars when it was occupied by the German troops and damaged by the UK-US forces bombings in 1944, respectively. The garden’s Old Greenhouse was built between 1889 and 1891 after the model of the Liege Greenhouses in Belgium. In 2011 the construction was rehabilitated as a tropical rainforest corner and now accommodates several examples of exotic plants. The Botanical Museum, to be found also inside the garden, near the entrance gates, is home to more than 5,000 plant species, including 1,000 exotic plants. 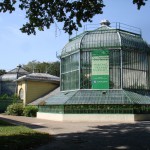 The garden is divided into several areas dedicated to ornamental plants, rare plants from the Balkans and the Mediterranean, the Dobrogea flora, an Italian garden, a cascade, a space for mountain plants, a roses garden, and the exotic plants part. Among the must-see plants here are four ginko-biloba trees and the tulip tree.